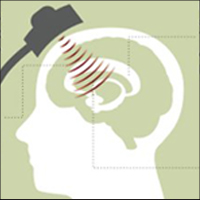 Transcranial magnetic stimulation (TMS) is a noninvasive method to cause depolarization or hyperpolarization in the neurons of thebrain.TMS uses electromagnetic induction to induce weak electric currents using a rapidly changing magnetic field; this can cause activity in specific or general parts of the brain with minimal discomfort, allowing for study of the brain’s functioning and interconnections.

A variant of TMS, repetitive transcranial magnetic stimulation (rTMS) has been tested as a treatment tool for various neurological and psychiatric disorders including migraines, strokes, Parkinson’s disease, dystonia, tinnitus and depression.

Effects of the TMS on the brain

The exact details of how TMS functions are still being explored. The effects of TMS can be divided into two types depending on the mode of stimulation:

Early attempts at stimulation of the brain using a magnetic field included those, in 19th century. The first successful TMS study was performed in 1985 by Anthony Barker and his colleagues at the Royal Hallamshire Hospital in Sheffield, England. Its earliest application demonstrated conduction of nerve impulses from the motor cortex to the spinal cord.

Single or paired pulse TMS causes neurons in the neocortex under the site of stimulation to depolarize and discharge an action potential. If used in the primary motor cortex, it produces muscle activity referred to as a motor evoked potential (MEP) which can be recorded on electromyography. If used on the occipital cortex, ‘phosphenes’ (flashes of light) might be perceived by the subject. In most other areas of the cortex, the participant does not consciously experience any effect, but his or her behaviour may be slightly altered (e.g., slower reaction time on a cognitive task), or changes in brain activity may be detected using sensing equipment. PET images are obtained to map the corresponding activity in the brain.

Repetitive TMS produces longer-lasting effects which persist past the initial period of stimulation. rTMS can increase or decrease the excitability of the corticospinal tract depending on the intensity of stimulation, coil orientation, and frequency. The mechanism of these effects is not clear, though it is widely believed to reflect changes in synaptic efficacy akin to long-term potentiation (LTP) and long-term depression (LTD)

The uses of TMS and rTMS can be divided into diagnostic and therapeutic uses.

TMS can be used clinically to measure activity and function of specific brain circuits in humans. The most robust and widely-accepted use is in measuring the connection between the primary motor cortex and a muscle to evaluate damage from stroke, multiple sclerosis, amyotrophic lateral sclerosis, movement disorders, motor neuron disease and injuries and other disorders affecting the facial and other cranial nerves and the spinal cord. TMS has been suggested as a means of assessing short-interval intracortical inhibition (SICI) which measures the internal pathways of the motor cortex but this use has not yet been validated.

Brain plasticity can be measured by rTMS and theta burst stimulation.

Studies of the use of TMS and rTMS to treat many neurological and psychiatric conditions have generally shown only modest effects with little confirmation of results.

Other areas of research include:

TMS uses electromagnetic induction to generate an electric current across the scalp and skull without physical contact. A plastic-enclosed coil of wire is held next to the skull and when activated, produces a magnetic field oriented orthogonal to the plane of the coil. The magnetic field passes unimpeded through the skin and skull, inducing an oppositely directed current in the brain that activates nearby nerve cells in much the same way as currents applied directly to the cortical surface.

The pulse generally reaches no more than 5 centimeters into the brain unless using the Deep TMS variant of TMS.

TMS is a new treatment for Major Depression cleared for use by the FDA in October 2008. Its use in other neurological disease and stroke rehabilitation is under studying in research centers.