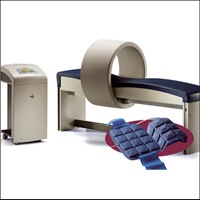 Resting potential of the cell is proportional to the ion-exchange of the cell membranes. In damaged cells, this potential changes. Magnetic field penetrates into all cells in the body in every depth simultaneously. So it is possible to treat Deep Pathologies that couldn’t treat directly by other procedures.

Pulsed electromagnetic field therapy (PEMFT), also called pulsed magnetic therapy, pulse magnetotherapy, or PEMF, is a reparative technique most commonly used in the field of orthopedics for the treatment of non-union fractures, failed fusions, congenital pseudarthrosis and depression. Different conditions require different frequencies. For example, 5Hz causes vasoconstriction whilst 10Hz and above causes vasodilatation. The most effective frequencies for treatment, are a base frequency of around 100-200 Hz.

The overall effects of magnet therapy

1.            Healing effects or regeneration of the bone tissues and Periosteum

2.            The anti-inflammatory effect: Magnetic effect has been proven effective in rheumatoid arthritis and osteoarthritis

3.            Analgesic effect: Magnetic effect has been proven effective in arthritis

4.            Anti-edema effects: Usually, the effects can be seen after the second treatment session.

The rehabilitative effect of magnetic therapy on bone fractures is widely recognized today. Magnets can be used for mending broken bones. Bone formation (osteogenesis) begins during prenatal development and persists throughout adulthood. Bone mass peaks around ages 25–30 years and declines gradually thereafter in both men and women. The effect of magnet therapy on Stimulating of bone formation has been proven.

Pulsed magnetic fields, by changing the potential of cell membrane, stimulate their activities. After a fracture occurs, new bone tissue forms to connect the broken pieces. When the broken bone fails to heal it is called a “nonunion.” the risk of nonunion is significantly increased by advancing age. Magnet therapy accelerate bone mending and increase bone mass. The most common use of magnetic therapy is in the treatment of osteoporosis, because it acts in two ways by slowing bone density loss and at the same time the piezoelectric effect induced activates bone regeneration.