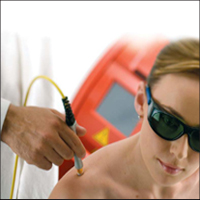 Laser Therapy uses specific wavelengths of light that have a strong anti-inflammatory, anti-edema effect on tissues that are exposed to the laser.  Painful conditions accompanied by swelling or inflammation benefit from this technology.

LASER is an acronym for Light Amplification by Stimulated Emission of Radiation.

This new generation of light therapy devices can be divided into three categories: 1) low-level laser

What does laser do?

When tissue cultures are irradiated by Lasers, enzymes within cells absorb energy from laser light. Visible (red) light and Near Infrared (NIR) are absorbed within the mitochondria and the cell membrane. This produces higher ATP levels and boosts DNA production, leading to an increase in cellular health and energy. Several studies have documented the ability of laser therapy to induce axonal sprouting and some nerve regeneration in damaged nerve tissues. When applied as treatment, therefore, Lasers have been shown to reduce pain and inflammation as well as stimulate nerve regeneration, muscle relaxation and immune system response.

The overall effects of lasers, specially, high intensity lasers, are

1- Photochemical effects: Low Level Laser Therapy (LLLT) has a photochemical effect. One of the main mechanisms of action occurs in the mitochondria (the cellular power plant inside every cell). The primary effect occurs when light is absorbed in cytochrome c oxidase a protein within the mitochondria. It also modulates enzymatic activity, affects intracellular and extracellular pH, and accelerates cell metabolism. LLLT promotes the synthesis of deoxyribonucleic acid (DNA) and RNA and increases the production of proteins.

3- Photo thermal effects: At a temperature of 40-42 ° C, anti-inflammatory anabolic effects of lasers are appeared.

These effects are used in treatment of neuromusculoskeletal disorders.

These disease and disorders include: